Originally part of the former Royal Aerospace Establishment Bedford airbase, the 400 acre Bedford Autodrome circuit complex was completed in August 1999 and is owned by former F1 driver Jonathan Palmer's Motorsport Vision Group. It's a purpose-built, private facility, built without the need to accommodate racing or crowds of spectators, and primarily to host top-notch corporate events. For this reason it has huge run off areas and very few barriers or obstructions to hit, and claims to be the safest circuit in the UK. This also means that Bedford Autodrome is the ideal venue for the track day novice.

Bedford has multiple configurations, although there are 4 main circuits which are linked together to form the 3.8 mile GT (Gran Turismo) version, frequently used on track days.

Facilities are first class, with 2 well-equipped hospitality areas at each end of the pit lane. There is a separate briefing room which also houses the restaurant. It is worth noting that Bedford has a very strict no spectator policy and under 16s are not permitted as there is no viewing area for them.

Bedford Autodrome is 6 miles north of Bedford, just off the A6.

The circuit is usually coned Yellow for turn in points and Orange for apexes.

The full GT circuit comprises 19 bends, and is a good mix of fast and slow corners, some technically challenging, plus several long straights. Starting with West 1, which is the first corner after passing the main pits complex, the braking point for the Hairpin is in line with the pit lane exit road; ensure you use the full width of the track on the exit. West 2 is nothing more than a flat left kink. West 3 and 4 make up the chicane. Using the kerb on the left side on the approach is a must, as is the kerb on the inside of the right, but do not use the kerb on the left hand side of the exit, as this one is very harsh and can pick the car up quite violently. West 5 and 6 follow, and are essentially a very fast left-right chicane where you should be building speed all the way through, and using the full width of the track. On the run down the back straight bring the car to the right hand side of the circuit for the ultra fast left kink of West 7. On the exit it is important to keep the car to the left and ensure that the wheels are straight. Then you brake hard for the tight right hander that is West 8. There is a white line painted on the road which is used to guide the single seaters on the corporate days. Follow the line into the apex and then cross the line to use the full width of the track on the exit. It is important to be careful with the power application here as this is one of the very few places at Bedford where the Armco barrier isn't far away.

From the exit of West 8 this takes you onto the 1km straight that runs down to the South 1 and 2 chicane. Picking a braking point is key and you should use the countdown boards attached to the barrier on the right hand side, adjusting your braking distance according to the stage of tune of your car. The chicane itself is straight forward; be careful to not turn in too early or start creeping into the middle of the road before the turn in. Remember to avoid the kerb on the left side of the chicane. The kerb on the right is flat and you should use about Â½ of the kerb. The next straight takes you down to the East hairpin which is very open on entry but tightens on the exit. Be patient with the power. The next fast right hander is straightforward but be careful of the bump mid corner. The following left hander brings you back on to the North circuit. The key is to use the kerb on the inside of the corner and carry the speed through using the full width of the track on the exit. This opens up the second left hander; again you should attack the kerb on the apex. The Hairpin on the North circuit is the tightest corner of the lap and ensure you scrub off enough speed before turning in, so you don't under steer off the track on the exit. The next right hander is a double apex with a nasty bump in the middle, so be careful as there is Armco on the inside. Next there is the run down the South straight into the penultimate corner. Brake at around the 125 metre board into the very simple 90 degree right hand corner. The final corner of the lap is West 13, and the key to this corner is to use the apex kerb on the inside and use the full width of the track on the exit. If required you can use the concrete that extends even further. 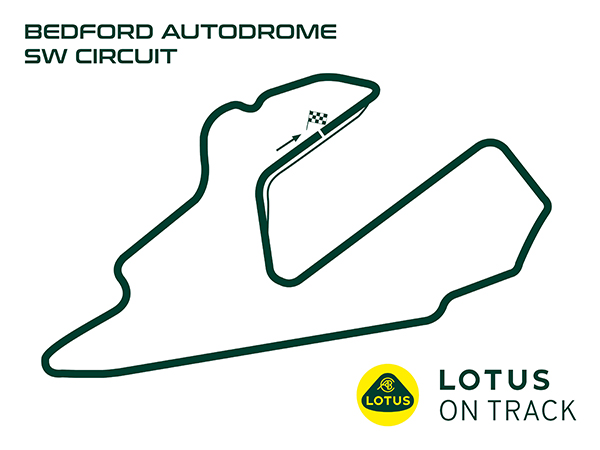 The Shorter South West version follows much of the same circuit, but after the South 1 and 2 chicane the circuit turns left instead of going down to the East hairpin. The trick here is to take a lot of kerb on the inside and run out over the exit kerb to open the corner up as much as possible. The next corner has a very similar approach, but use less of the inside kerb as this is slightly raised. The next corner is the fast left hander that brings you back onto the South straight. The corner has a late apex but there is also a small bump just before the apex which can be unsettling. This will then give you the same run down to the last two corners as on the GT circuit.

Noise limits (101db static & 87db drive by - 20m) are strictly adhered to. It is worth putting your cat back in if your car's a bit loud!

Closest Fuel Station:
On-site or there is a shell a mile or so north on the A6.

Accommodation in your area: